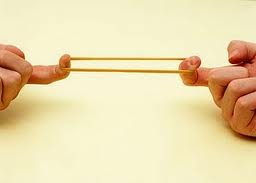 It feels like a rubber band, stretched to the max, just about to break.

It might be the economy. Could be the political unrest in our world. I suppose a combination of several things is likely. But man, are tensions high right now!  You see it on the road, in grocery stores and at work. People are completely on edge.  Tempers are flaring. Guys are ready to fight with little or no provocation. I’ve been told off more times recently than I care to mention.

Be on guard. Don’t get sucked into an argument. It would be very easy for you to get into a lot of trouble and to do things you’ll really regret later.

I think it’s important for Christ-followers to be geared to handle tough times like these. God’s Word helps us in real practical ways.

Think about these things:

Fools give full vent to their rage, but the wise bring calm in the end.  (Proverbs 29:11)

What causes fights and quarrels among you? Don’t they come from your desires that battle within you? 2 You desire but do not have, so you kill. You covet but you cannot get what you want, so you quarrel and fight. You do not have because you do not ask God.  (James 4:1-2)

Blessed are the peacemakers, for they will be called children of God.  (Matthew 5:9)

Don’t do it – don’t break like an over-stretched rubber band.

One Reply to “tensions are high!”