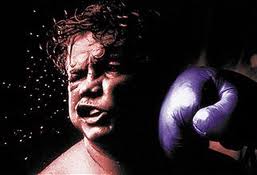 As far as I know, there are only two ways to get tough:

1 – you’re born tough. You know those kids – they usually have big heads and thick bodies. They dominate sandlot football because no one can tackle them.

2 – you learn to be tough through repetitive practice. If you take enough punches, you toughen up.

Seems to me that this is a time when people need to be tough. We have to be strong to survive. There are a lot of punches being thrown. Wimps aren’t going to make it.

Be tough enough to…

stand for your convictions.

not live for the approval of others.

be able to withstand some resistance.

If some people discover that they can make you cry by saying mean things – guess what they’ll do? And just for fun!

Listen, toughness and hard-heartedness are not the same thing. People who have been hurt sometimes go into self-preservation mode. They close themselves off because they are afraid of being hurt again. And I don’t blame them. But I am not encouraging hearts of stone. They only destroy. Like my buddy says, “thick skin but tender hearts.”

I am a proponent of old fashioned getting smashed in the mouth and staying in the fight. Be able to endure some pain while maintaining your composure. If you can’t do this, you’ll not survive this season of our world.  If you can take a punch or three, and stand your ground, you’re a tough cookie. You’ll survive.