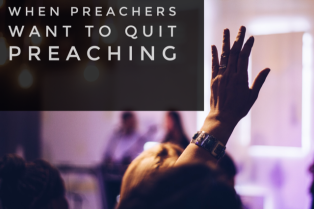 The Gospel is like “A Fire Shut Up in My Bones!” Through the years, countless preachers, including me, excitedly made this proclamation! There are few preachers of any experience who have not quoted or referred to Jeremiah’s pronouncement in chapter 20 and the inability to keep the Word of God quiet. Jeremiah describes it as a “fire shut up in his bones.” Although he had considered trying, he simply could not keep it in; the Message had to come out! It’s an exciting passage to recite, and it usually elicits a warm response from listeners.

But I wonder how many preachers recall the setting of this “exciting” proclamation. Jeremiah had been prophesying (preaching) for years, with little or no positive response. The people didn’t like his prophecies and preferred the prophecies that declared favorable, positive things. He was rejected, ridiculed and denigrated. Years of preaching with no positive response! The people had enough. Finally, Jeremiah was arrested, was beaten and locked up in stocks in prison. He was paying a heavy price for preaching a non-compromised Truth.

Jeremiah was in pain; he was suffering physically, emotionally and spiritually. He was hurt, frightened and disappointed. He opens chapter 20, verse 7 by expressing his frustration with God about how he has been treated. He feels betrayed. Jeremiah 20:7-8 says, “You deceived me, Lord, and I was deceived; you overpowered me and prevailed. I am ridiculed all day long; everyone mocks me. 8 Whenever I speak, I cry out proclaiming violence and destruction. So the word of the Lord has brought me insult and reproach all day long.” These are the words of a damaged individual. Before any of us accuse him of having a pity party, put yourself in his place.

Jeremiah is so hurt, he contemplates resigning as the local prophet. He’s thinking about quitting! Some reading this article are contemplating the same things. The details of your situation are different, but you can identify with Jeremiah’s raw feelings. While you might not dare say the things that Jeremiah said, you have thought them.

After a moment of exploring giving up his ministry, Jeremiah comes back to his senses. There, still in pain and in jail, still suffering and confused, he recalls the power of the Word of God which is within him. He’s still being laughed at, his enemies are still threatening him. He has no reason to believe that he will live through the night. But he simply has no choice but to keep preaching, regardless of his situation or his feelings. If he stops preaching, the fire of the Truth will burn him up from the inside out!

This is the setting of this famous affirmation of the call to preach. It’s not an exciting worship service, it’s not a Campmeeting or revival service. It was the lowest of low pits. At the worst possible moment for Jeremiah, his call to prophecy is confirmed. The call to preach is not about comfort, not about a favorable setting, or even about reception by others. The call to preach is an irrevocable commission to speak the Word of God, regardless of the consequences.

I wonder if any of us, in a similar situation, would end up in such a beautiful and poetic place. If God had allowed me to suffer in such extreme ways, would I be capable of confessing my inability to stop preaching?

I think the next time I am tempted to throw out Jeremiah’s proclamation (maybe looking for an emotional response from the church), perhaps I will weigh out the full context and intent of the statement. It is too powerful and meaningful to be used in a trite way.

And the next time I am contemplating giving up, I will recall what my Brother Jeremiah experienced and how he came to his resolution.

I encourage you to do the same.

One Reply to “When Preachers Want to Quit Preaching”