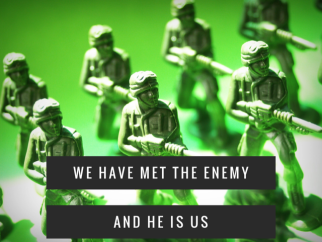 Cartoonist, Walt Kelly said, “We have met the enemy and he is us.” I am concerned that this has, in too many instances, become the case for some of us.   Racially, economically, politically, generationally, and stylistically, we are fighting amongst ourselves. Friendly fire, weapon fire coming from one’s own side, is the worst. You expect to get shot at, but not by the folks wearing the same uniform as you.

It appears to me that, at times, the church has been influenced by the culture in this regard. Rather than being the peacemakers our world so desperately needs us to be (and we are called by Christ to be), a few have, I believe inadvertently, taken on the identity of brawlers, combatants, and pugilists. Without exaggeration, I don’t recall a time when Believers, church members, pastors and even ministerial colleagues have been so deeply engaged in battle with one another. I realize that only a minority of people is involved, but it sure feels major when so much of our wars are carried out in public view. Of course, there is so much more good than bad taking place, but the good doesn’t get the press like the bad.

I don’t like to argue or debate. Conflict is no fun for me. I have friends who enjoy these things. They sometimes want to argue with me about it (LOL). But this seems deeper.   We all agree that there are times that conflict must be embraced. A few things are worth fighting over. But much of the result of the fighting I’m witnessing isn’t positive; it’s devastating. Families, friends, churches and, perhaps denominations are splitting. If we are detaching over non-negotiables, though painful, we understand. When serious Biblical or theological schisms happen, lines must be drawn. But I don’t see the redemptive value of the disagreements when the disagreements are over negotiable things, yet they end with relational ruptures. Sometimes, situations require that we divide, but more times than not, they don’t.

I hope that we can get a respite from the verbal and relational and social media jousting. It is wearying to continually navigate contention.  And until we stop, we are focused on the wrong enemy.

We have one enemy – the devil. Together, let’s fight him. Until he is defeated, we shouldn’t have enough time to fight each other. Let’s not become our own worst enemies.