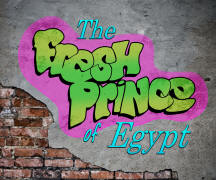 Tomorrow – Sunday, November 15, marks the conclusion of our 3 week series on the life of Moses. The Fresh Prince of Egypt has been a lot of fun to prepare for and deliver. I would have liked more time to develop the messages but, due to the holiday schedule, and the short attention span of our church, we decided to go with three weeks.

The following is pretty much my entire message. If I get hit by a bus on the way to church, go ahead without me, somebody just pull this up and read it! If you plan to miss church services tomorrow, or if you are reading this after the fact, at least you know what I had to say. If you stay home after reading this, you may pay your tithes on line here.

Nine year old Joey, was asked by his mother what he had learned in Sunday school.

“Well, Mom, our teacher told us how God sent Moses behind enemy lines on a rescue mission to lead the Israelites out of Egypt. He gave Moses an awesome high-tech GPS unit that guided them, by satellite, out of Egypt. When they got to the Red Sea, Moses had his engineers construct a massive hovercraft that carried all the Israelite people across the Red Sea safely. He then had his IT team create a humongous High Definition jumbo-tron computer screen projecting an image of a suspension bridge across the sea. It was so realistic that the Egyptians army tried to walk across it. Of course, they all drowned, but all the Israelites were saved.”

“Now, Joey, is that really what your teacher taught you?” his mother asked.

“Well, no, Mom. But if I told it the way the teacher did, you’d never believe it either!”

As unbelievable as it may sound, this stuff is true!

The setting:
The Israelites leave Egypt on their way to freedom, but they have a very long journey ahead of them.
This is more than a physical journey; there is more meaning and purpose to their travels.
God was with them in an unprecedented way.

God made His presence with the Israelites perfectly clear and obvious.

Because God was with them…
1. DSTSS (don’t sweat the small stuff) (beware of my sarcasm)

God directed them to the Red Sea (kind of a dead end)
Trouble was on the way…
Exodus 14:10 As Pharaoh approached, the Israelites looked up, and there were the Egyptians, marching after them. They were terrified and cried out to the LORD. (NIV)

It is as though the people were saying to Moses: “Another fine mess you’ve gotten us into…”
Exodus 14:11-12 They said to Moses, “Was it because there were no graves in Egypt that you brought us to the desert to die? What have you done to us by bringing us out of Egypt? 12 Didn’t we say to you in Egypt, ‘Leave us alone; let us serve the Egyptians’? It would have been better for us to serve the Egyptians than to die in the desert!” (NIV)

God’s ingenious plan–
Exodus 14:15 Then the LORD said to Moses, “Why are you crying out to me? Tell the Israelites to move on. (NIV)

“Move on?” They were trapped! No place to go!

Exodus 14:16 Raise your staff and stretch out your hand over the sea to divide the water so that the Israelites can go through the sea on dry ground. (NIV)

Moses is “all in” with God’s plan.
An epic event:
Exodus 14:19-31 Then the angel of God, who had been traveling in front of Israel’s army, withdrew and went behind them. The pillar of cloud also moved from in front and stood behind them, 20 coming between the armies of Egypt and Israel. Throughout the night the cloud brought darkness to the one side and light to the other side; so neither went near the other all night long.

21 Then Moses stretched out his hand over the sea, and all that night the LORD drove the sea back with a strong east wind and turned it into dry land. The waters were divided, 22 and the Israelites went through the sea on dry ground, with a wall of water on their right and on their left.

23 The Egyptians pursued them, and all Pharaoh’s horses and chariots and horsemen followed them into the sea. 24 During the last watch of the night the LORD looked down from the pillar of fire and cloud at the Egyptian army and threw it into confusion. 25 He made the wheels of their chariots come off so that they had difficulty driving. And the Egyptians said, “Let’s get away from the Israelites! The LORD is fighting for them against Egypt.”

26 Then the LORD said to Moses, “Stretch out your hand over the sea so that the waters may flow back over the Egyptians and their chariots and horsemen.” 27 Moses stretched out his hand over the sea, and at daybreak the sea went back to its place. The Egyptians were fleeing toward it, and the LORD swept them into the sea. 28 The water flowed back and covered the chariots and horsemen–the entire army of Pharaoh that had followed the Israelites into the sea. Not one of them survived.

29 But the Israelites went through the sea on dry ground, with a wall of water on their right and on their left. 30 That day the LORD saved Israel from the hands of the Egyptians, and Israel saw the Egyptians lying dead on the shore. 31 And when the Israelites saw the great power the LORD displayed against the Egyptians, the people feared the LORD and put their trust in him and in Moses his servant. (NIV)

At the very beginning of their journey through the desert, God proves to them that He will take care of them.

Crossing the red sea was impossible. The idea of crossing it on dry ground, well that was just absurd.
Let me remind you of one of the greatest principle in God’s Word:
Nothing is impossible with God!
In fact:
The words, “impossible”, “hopeless”, and “snowball’s chance in hell” are not in God’s vocabulary.
Situations may seem hopeless, but ultimately, God comes through for His children.

Earlier, when I referred to “small stuff”, I did not mean “unimportant”, I did not mean “simple”, and I did not mean “easy”.
I meant in relation to God’s limitless power, our major crises are small.
He can do anything! And, as a reminder from week one:
“There is nothing that God won’t do for one of His children that is in need.”
God stops at nothing for His children.

He knows how to take care of us.

2. God does not need a bailout!
a. Exodus 16: Manna and quail provided (even with this, the people looked back – Numbers 11: ”remember the leeks, onion and garlic…?”
b. Exodus 17: Water from a rock
c. Their clothes and shoes did not wear out.
Deuteronomy 29:5 “During the forty years that I led you through the desert, your clothes did not wear out, nor did the sandals on your feet.” (NIV)

God is not limited to physical resources.
God has not filed for bankruptcy! He is not in recession! He does not need a bailout!
We are limited, God is not!

The previous two thoughts (God will do anything for His children and God will supply our needs) are predicated on the obedience of God’s children.

What do we obey?

What the ten are (with minor commentary):

1. “No other gods” Don’t allow anything to compete with God as top priority in your life.
2. “No idols” Don’t worship idols or icons or images or statues or heroes.
3. “Don’t use the Lord’s name in vain. Don’t misuse God’s name. (unless you are praying, no more OMG!)
4. “Remember the Sabbath Day” Treat God’s day with honor and respect.
5. “Honor you mother and father” Treat your parents with honor and respect.
6. “ Don’t kill” Do not take a human life.
7. “Don’t commit adultery” Do not have sex with anyone other than your husband or wife. (someone you are legally married to.)
8. Do not steal. (if you don’t know what that means, please stay away from the offering basket)
9. “Don’t bear false witness” Do not lie.
10. “Don’t covet” Do not wish for that which belongs to someone else.

These are not called the “Ten Suggestions” or “Ten Recommendations”.
And there is no expiration date!
God wasn’t fooling around when He establish His principles of conduct.
If you keep these Ten Commandments, you will be blessed.
If you don’t, you won’t.

This (keeping the Commandments) probably looks impossible to some of us.
(just like crossing the Red Sea looked impossible,
like escaping the Egyptians looked unlikely,
like feeding a couple of million people in the desert couldn’t happen,
like getting water out of a rock sounds ridiculous,
clothes lasting forty years…)
Get the idea?

b. Appears along with Elijah at the transfiguration of Christ -Matthew 17:3

c. An incomparable life:
Deuteronomy 34:10-12 Since then, no prophet has risen in Israel like Moses, whom the LORD knew face to face, 11 who did all those miraculous signs and wonders the LORD sent him to do in Egypt–to Pharaoh and to all his officials and to his whole land. 12 For no one has ever shown the mighty power or performed the awesome deeds that Moses did in the sight of all Israel. (NIV)

But as great as Moses was….
The purpose of his life was to point to Jesus.
Jesus is greater: Hebrews 3:2-6 Jesus was faithful to God, who appointed him, just as Moses was faithful in serving all of God’s people. 3But Jesus deserves more honor than Moses, just as the builder of a house deserves more honor than the house. 4Of course, every house is built by someone, and God is really the one who built everything. 5Moses was a faithful servant and told God’s people what would be said in the future. 6But Christ is the Son in charge of God’s people. And we are those people, if we keep on being brave and don’t lose hope. (CEV)

As great as Moses was….Jesus is greater!

What we have learned today:
• The impossible situations that we face are easily overcome by God.
• God is not limited by physical resources.
• Obedience to the 10 Commandments is key to being blessed.
• As great as Moses was, we don’t want to be like him. We want to be like Jesus!

One Reply to “The Fresh Prince of Egypt”