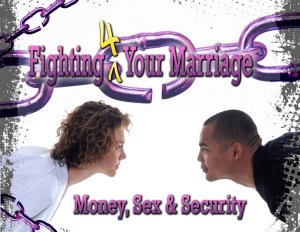 Today is the conclusion to our series Fighting 4 Your Marriage. Because I know that there is absolutely no way that I can deliver all of the material I have today without keeping the people until 1:00 in the afternoon, I am putting my entire outline here. If you check this out before you come to one of our services this morning, don’t be tempted to stay at home. In fact, you could have a little fun by whispering to the dude next to you whatever I am going to say, just before I say it. He’ll think you are a prophet!

(I love this story) SECRET TO A LONG MARRIAGE:
A man and woman had been married for more than 60 years. They had shared everything. They had talked about everything. They had kept no secrets from each other except that the little old woman had a shoebox in the top of her closet that she had cautioned her husband never to open or ask her about.
For all of these years, he had never thought about the box, but one day the little old woman got very sick and the doctor said she would not recover. In trying to sort out their affairs, the little old man took down the shoe box and took it to his wife’s bedside. She agreed that it was time that he should know what was in the box. When he opened it, he found two crocheted dolls and a stack of money totaling $95,000. He asked her about the contents . “When we were to be married,” she said, ” my grandmother told me the secret of a happy marriage was to never argue.
She told me that if I ever got angry with you, I should just keep quiet and crochet a doll.”
The little old man was so moved; he had to fight back tears. Only two precious dolls were in the box. She had only been angry with him two times in all those years of living and loving. He almost burst with happiness.”Honey,” he said, “that explains the doll, but what about all of this money? Where did it come from?””Oh,” she said, “that’s the money I made from selling the dolls.”
The Prayer……. Dear Lord, I pray for Wisdom to understand my man; Love to forgive him; And Patience for his moods; Because Lord, if I pray for Strength, I’ll beat him to death…….. because I don’t know how to crochet. (thank you – Rebecca Simms!)

We need to learn how to make the bad times work for us instead of against us!

Securing your marriage in uncertain times.
Couples: how to make tough times work for you instead of against you.
How to fight For your marriage rather than against it.

Intro: How do these news headlines make you feel?…

USA Today headline from Wednesday: Alert Nears Pandemic Level
World Health Organization Director: “it really is all of humanity that is under threat”

America Online headline, 4.14.09:
“Massive Asteroid Headed Our Way”
Strike Would Be Global Catastrophe, What Are the Odds It Will Hit Earth?
“An asteroid the size of a 25-story building will come within 18,000 miles of Earth on April 13, 2029” –

America has grown accustomed to fear!
We thrive on scary stuff.
Some of us have become addicted to panic!

As Pastor Chris Goins put it recently, “It’s The End of the World As We Know It…but God is Not On Prozac!”

Bad news is everywhere!
The results of all of this bad news?
Fear and stress.
People are freaked out.
And it is taking a toll on our marriages.

The most powerful and controlling emotions: common emotions in a marriage…
Anger: can cause you to do all kinds of things that you would not normally do.

But there is a more powerful and destructive emotion in marriage:
Fear:
1) can cause you to do things you would not normally do.
2) can keep you from doing things you should do!
Issues related to fear: Intimidation, apprehension, uncertainty, insecurity.

Marriages are being destroyed because of the stress they are experiencing.

This kind of uncertainty and fear has a spiritual source.
2 Timothy 1:7 For God has not given us a spirit of fear and timidity, but of power, love, and self-discipline. (NLT)

We have to keep fear in perspective.
An easy way to recall what fear may actually be:
False Evidence Appearing Real.
The evidence is saying that only bad is coming. That evidence is not real!
but what God has for you is real…
Jeremiah 29:11 For I know the plans I have for you,” declares the LORD, “plans to prosper you and not to harm you, plans to give you hope and a future. (NIV)

The times we are living in are referred to as “uncertain”.
I. An “Uncertain” Future
“Uncertain” certainly sounds certain.
When it comes to my future, “Uncertain”, “unsure”, “unknown” all sound bad to me!
I want to know, not only what is going to happen but I want to know that whatever happens will be good.
And, because of everything we are hearing, we don’t feel very good about our future right now!

Jeff and Diann Robbins gave me something to read that was written by David Wilkerson.
David is a prophet and, like most prophets, has the reputation of being a bit of a “doomsdayer”.
But he was writing about what Jesus said about worry in Matthew 6
Listen what he says:
Jesus also calls us to this way of living: giving no thought about tomorrow and putting our future into his hands. Matthew 6:31-34”31 So do not worry, saying, ‘What shall we eat?’ or ‘What shall we drink?’ or ‘What shall we wear?’ 32 For the pagans run after all these things, and your heavenly Father knows that you need them. 33 But seek first his kingdom and his righteousness, and all these things will be given to you as well. 34 Therefore do not worry about tomorrow, for tomorrow will worry about itself. Each day has enough trouble of its own. (NIV) )
Jesus doesn’t mean that we’re not to plan ahead or do nothing about our future. Rather, he’s saying simply, “Don’t be anxious or troubled about tomorrow.” When you think about it, most of our anxieties are about what might happen tomorrow. We’re constantly harassed by two little words: “What if?”
“What if the economy fails, and I lose my job? How will I pay the mortgage? How will my family be able to survive? And what if I lose my health insurance? If I get sick or have to be hospitalized, we’ll be ruined. Or, what if my faith fails me in trying times?” We all have a thousand “what if” anxieties.
Jesus interrupts our “what ifs” and tells us, “Your heavenly Father knows how to take care of you.”
Christ tells us, “You don’t need to worry. Your Father knows you have need of all these things, and he won’t ever forsake you. He is faithful to feed you, clothe you and take care to supply all your needs.”
Matthew 6:26-30 Look at the birds of the air; they do not sow or reap or store away in barns, and yet your heavenly Father feeds them. Are you not much more valuable than they? 27 Who of you by worrying can add a single hour to his life? 28 “And why do you worry about clothes? See how the lilies of the field grow. They do not labor or spin. 29 Yet I tell you that not even Solomon in all his splendor was dressed like one of these. 30 If that is how God clothes the grass of the field, which is here today and tomorrow is thrown into the fire, will he not much more clothe you, O you of little faith? (NIV)
We gladly give all our yesterdays to the Lord, turning over to him our past sins. We trust him for forgiveness of all our past failures, doubts and fears. So, why don’t we do the same with our tomorrows? The truth is, most of us cling tightly to our future, wanting the right to hold onto our dreams. We make our plans independent of God, and then later ask him to bless and fulfill those hopes and desires.

Wilkerson is trying to get us set up to enjoy a secure future even in uncertain times.

II. From “Uncertain” to Secure
When tomorrow is unknown, you can be secure.

Here’s how:
1. Be shrewd/be innocent:
Matthew 10:16 I am sending you out like sheep among wolves. Therefore be as shrewd as snakes and as innocent as doves. (TNIV)

2. Be listening.
Take in the news in balance. There is a time to turn it off.
Who is your influence? Hearing God’s voice in the noise.
Biggest question: what is God saying?
Not necessarily the loudest voice. Still small voice. His sheep know His voice.
Who is in control? Learning to trust.

3. Be obedient.
Plain and simple: God promises to take care of His kids when they are obedient to Him.

4. Be dependent: if your life does not require you to depend on God, you aren’t accomplishing much!
I’m going to say something crazy:
Some awesome things start happening when we get to the point in our lives that, if God does not come through, we are doomed!

III. A chapter that can Secure Your Marriage and Your Future:
II Chronicles 20

1. The bad news:
2 Chronicles 20:2 Some men came and told Jehoshaphat, “A vast army is coming against you from Edom
(NIV)

2. Their response: (we can’t choose our circumstances, only our response to the circumstances.)
2 Chronicles 20:3-4 Alarmed, Jehoshaphat resolved to inquire of the LORD, and he proclaimed a fast for all Judah. 4 The people of Judah came together to seek help from the LORD; indeed, they came from every town in Judah to seek him. (NIV)

3. A realization of dependence (prayer to God)
2 Chronicles 20:12 For we have no power to face this vast army that is attacking us. We do not know what to do, but our eyes are upon you.” (NIV)
“We don’t know what to do.”
“Our eyes are on you.”

4. Unity of family
2 Chronicles 20:13 All the men of Judah, with their wives and children and little ones, stood there before the LORD. (NIV)
Entire families (husbands were not expected to “fix” this. They trusted God together.)
Rather than blame one another for the mess they were in, they stood together.
Instead of fighting against each other, they decided to fight for each other.
They decided to let God fight for them!
They faced their fears head on. And they trusted God.

5. The Spirit of the Lord speaks
2 Chronicles 20:14 “Then the Spirit of the LORD came upon Jahaziel”
2 Chronicles 20:15-17 This is what the LORD says to you: ‘Do not be afraid or discouraged because of this vast army. For the battle is not yours, but God’s.
17 You will not have to fight this battle. Take up your positions; stand firm and see the deliverance the LORD will give you, O Judah and Jerusalem. Do not be afraid; do not be discouraged. Go out to face them tomorrow, and the LORD will be with you.'” (NIV)

This vast army (did not deny the gravity of the situation)
The battle is not yours, but God’s.
You will not have to fight this battle
Stand firm and see the deliverance of the Lord

6. God takes care of His Children
2 Chronicles 20:22 As they began to sing and praise, the LORD set ambushes against them (those who were attacking them) … and they were defeated. (NIV)

Importance of worship – vs. 21-23 – not an activity, a lifestyle, an approach to living trust.

The best way, most effective way is to allow God to fight for you.

Beracah means: The Valley of Praise!

Conclusion:
Our marriages are under attack.
The news does not look good.
Our future is uncertain.
But the Best news is: God is fighting for your marriage!
And because He is fighting FOR your marriage, you can win!