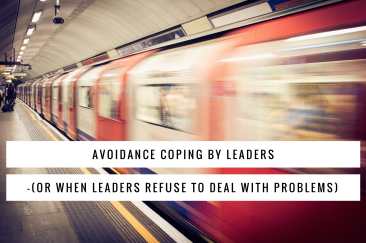 There are some pretty heavy psychological observances that can be employed when studying leadership. At the risk of overanalyzing, we are considering what causes some leaders to refuse to deal with failure. I define failure in this instance as the lack of taking a group or organization where God wants it to go. While I certainly am not the ultimate judge of the leadership effectiveness of anyone, I do have the responsibility of helping some leaders be as efficacious as possible.

Diversion may be defined as something that takes attention away from what is happening. When leaders are diverted from their primary task, the organization under their care suffers. We have all witnessed this. It’s interesting to observe leaders who are serving organizations that are failing, but the leaders don’t focus on the solutions. A tendency of some leaders is to concentrate on something else and, thereby, deflect the attention that may reveal that they are neglecting their duty. The focus that is required in order to solve the issue is lost.

We leaders may be like the bird dog described by Aldo Leopold:

“I had a bird dog names Gus. When Gus couldn’t find pheasants, he worked up an enthusiasm for Sora rails and meadowlarks. This whipped-up zeal for unsatisfactory substitutes masked his failure to find the real thing. It assuaged his inner frustration.” (A Sand County Almanac, p. 200)

Another example may be (hypothetically, of course!) a pastor of a shrinking church that chooses to spend his or her time debating politics or bemoaning the decline of the culture or criticizing the church members. In the few precious hours of leadership influence they have available, they point out the faults of others. I do not think that these leaders are necessarily malicious. I believe that diversion is a tactic that some leaders employ because they simply don’t know what else to do. They are frustrated by their failed efforts to fix their organization and they are compelled to do something. So, blaming others, attacking others who are having success, minding the business of others and conflicting with team members becomes their default response.

To refer again to a psychological term, rumination “refers to the tendency to repetitively think about the causes, situational factors, and consequences of one’s negative emotional experience (Nolen-Hoeksema, 1991)” (psychologytoday.com). When people engage in rumination (overthinking) they are typically trying to think their way out of uncomfortable emotions. This is in the place of focusing on solutions to the problems. It can be easier for a leader to come up with reasons rather than answers. There have been times in my experience when I have spent more time blaming my predecessor, analyzing the dysfunctions of the organization and justifying my lethargy rather than working toward resolutions for the problems at hand.

Avoidance coping is a maladaptive coping mechanism characterized by the effort to avoid dealing with a stressor. (mentalhelp.net) A distraction or a non-essential issue can steal the attention of a leader, especially when she is under stress. It can be relieving to think about another topic rather than to continue to wrestle with one’s own problems.

Then there is the more diabolical diversion tactics. If a leader under duress can create a diversion that will focus the attention of followers on someone or something else, the pressure can be alleviated. We’ve seen this personified in blaming/projecting (pointing at others as the problem), distracting (changing the subject or avoiding confrontation) and procrastinating (putting off the inevitable).

Some unscrupulous leaders are masters at clouding the issue or offering a “red herring” – misleading or distracting from a relevant or important issue. Slight of hand or misdirection is useful in magic tricks and sports but it has no place in the leadership of an organization.

A railroad engineer is at the helm of the train, which is speeding out-of-control down the track. As it heads toward the train station where, short of preventive maneuvers, lives will be lost, the engineer discusses the poor condition of the tracks, the outdated equipment of the engine, the bad attitudes of the passengers and the lack of wisdom of those who chose to build the train station in that location. What he needs to do is hit the brakes; but instead, he focuses on things that are out of his control. The result is devastation.

Leaders, we are the engineers. The train is our organization. Let’s take ownership. People are desperate for leaders who can identify the solutions to problems and to lead the organization through the crises.